Since my first post about my new internship, I have continued to be challenged by my job and to learn new skills on an almost daily basis. Week five was particularly special because I got to test myself on whether or not I remembered some of the things I learned on my very first day.

On the first of every month, we check all of the fire extinguishers, checking off all of the boxes on a form to make sure that they are all properly intact and ready in the event that they need to be used. Since I began on October 3, this has been designated my job. Along with this, we have a film display in one of our display cabinets, with thing such as posters for vintage Hollywood flicks, ticket stubs and advertisements, as well as a film reel. For those of you in the archival profession, you will likely know that film, when it begins to decay, is extremely combustible. With this in mind, it is now part of my first-of-the-month duties to check that film reel and make sure that it doesn’t show any signs of breaking down. That way we hopefully won’t have to use the fire extinguishers that I also checked beforehand.

Finally, I also check and change the hygrothermographs. Hygrothermowahtnow? Hygrothermographs. These are the neatest machines, and I am still very excited that it’s my job to manage them now. Basically we have three of these machines, one placed in the archives, one in the parlor exhibit, and one in the school room exhibit, which track the humidity in the room. Essentially each machine has a slip of paper with the dates for the month, which gets wrapped around the cylinder inside, and two pens with rest on the cylinder. Throughout the month those pens run along the paper, and whenever there is a raise or a drop in the humidity, the needles raise or drop correspondingly.

My job every month now is to gather up all the machines (and not mix them up, as specific ones go in their designated spaces, and once you change the paper and put them back together, you can’t see which room you wrote down that it’s supposed to go in!), and open them up. Once I remove the paper from each of them, I check and make sure there isn’t anything unusual, such as a really dramatic drop in the humidity, or vice versa. Once this is done, each machine gets a new slip of graph paper, with the room that it corresponds with and the dates for the month that this data pertains to, and it gets put back together, returned to it’s place, and switched back on for another month. The paper that I collected from each of them gets put in the designated folder along with all of the others from previous months.

This month I also finished, FINISHED, all of my scanning. Yay! As it turns out, the number the curator had originally estimated for how many negatives their were, she figured about 450, was slightly off. There are in fact 599.

Now that I am finished scanning them, I have moved on to the next phase of the work: accessioning and cataloging them. This has proved to be much more labour intensive. On average, each negative takes me between 15-20 minutes to accession, meaning I tend to get about 10 done a day. Given that I have 599 to get through, I’m going to be here a while. This is the first time I have ever cataloged negatives though, so I have already learned so much.

A lot of what I have learned is how to be brutal. Some of the negatives in this collection have at one point or another had a positive image made from them, which we also have. In the case where I have a negative and a positive, I will accession them both under the same number, specifying which is which, and put a note in the curatorial remarks on the database stating that this has been done. There have been several instances however, where I have a negative and a positive, but the positive was copied backwards, or in other cases, I will have two or three positives, and perhaps one positive is facing the right way, but the other two are backwards, and one of the backwards ones has writing on the back which provides important information about the image. What am I supposed to do with that?

The first time this happened, I had two positive images, both of which were backwards, and one which had writing on the back that gave similar information to what was written on the original envelope. I took it to the curator’s office to ask her what to do, and Heather looked at them and, realizing they were both backwards, asked me, “Do we have this information elsewhere?” “Yes, it’s written on the envelope too, but it’s worded a bit differently.” Before my very eyes, and to my complete shock and horror, she ripped up the two positive images and informed me we wouldn’t bother keeping either. What a lesson!

This month I also finished one of the books I have been reading as part of my research. “‘This was no ____ Picnic’ 2.4 Years of Wild and Woolly Mayhem in Dawson Creek” by John Schmidt is a collection of first hand accounts from men and women working on, or living near the construction of the Alaska Highway. Having finished a book giving a general history of the construction of the highway, this was an excellent book to move onto next to fill out my knowledge of the experience. 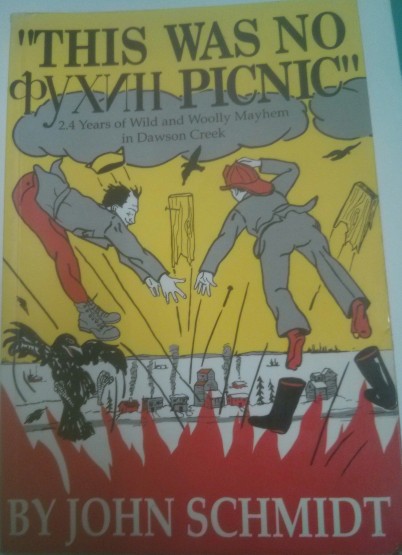 Since finishing this book, I have now begun digging into our archival holdings for more information. The curator provided me with these three binders, which have been keeping me quite busy. The first is based on oral interviews, but does not actually contain the transcripts (unfortunately), but rather the stories that the collectors then wrote based on the interviews that they conducted with people who built the highway. In this binder I found the answer to a question that has been driving me nuts since I started this: Why did Rudy Schubert, who was a Canadian from Fort St John, join the American army during the war? Apparently, according to the information in this binder, he tried to enlist in the Canadian Army, but was denied by the officer that he tried to enlist with, because of his German heritage. I actually exclaimed out loud with excitement when I read that and finally had an answer that made a lot of sense. 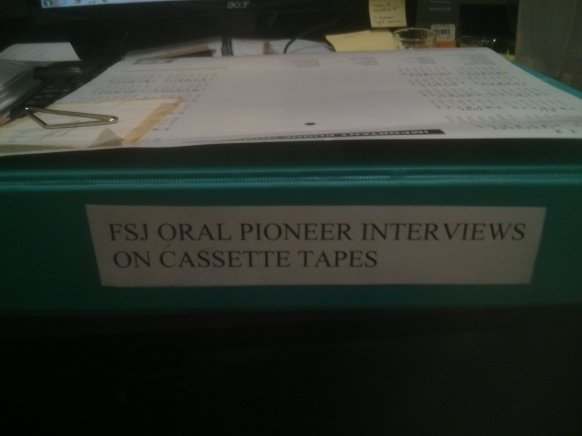 The two other binders I have been working my way through contain photocopies of newspaper and magazine articles about the Alaska Highway, some written during or just after its construction, and some written in anticipation of the 50th anniversary of its completion celebrated in 1992.

This week was also quite exciting because it involved a little fieldtrip. The museum keeps an exhibit display at the local hospital, and the agreement with the hospital is that this display gets changed every six months. I got to help Heather pick out the artifacts she had in mind for the new display, and make up the text panels using foam core board, spray-gluing the text onto the board, and cutting each one out with an exacto knife. Then we packed up the car and went to the hospital to take out the old display and put in the new one. This was a really interesting learning experience because I actually got to watch Heather make decisions about the space once we got in there. For example, some of the items we had, once we filled the case with the most essential artifacts and the text panels, just simply wouldn’t fit, and so we made the decision to not include them in the display.

Finally this past week, I got to accession a dollhouse. This was so. cool. And also very, very hard. The dollhouse was originally from 1948, and was an item which could be ordered from a catalog and then put together once it arrived. This particular one was never actually put together though. I have never accessioned something with so many parts, so it was an overwhelmingly time consuming task, but I really enjoyed the challenge, and felt so gratified putting so much effort into making sure I did it properly. The first day I saw it, we roughly assembled it to make sure that we did actually have all the pieces, counted the pieces, and then assigned each a letter of the alphabet so that it could all be accessioned together under the same accession number. Then we photographed each piece for the database. All of this took me an hour.

The next day that I worked on this was the really tough work. Now it was time to actually put it up on the database. This meant taking measurements of every single piece, recording which piece these measurements corresponded with, and how the pieces were listed, writing a detailed description and history of the item, and completing the condition report. The dollhouse was in fairly rough shape, so the condition report alone took a very long time, as there were several things on each piece which needed to be noted. In the end, just the accessioning took me two and a half hours. So all together, accessioning one dollhouse took three and a half hours of labour. If you’ve ever wondered why small museums and archives don’t always have a database, or their entire collection up on a database yet, this is why.

The next two weeks should bring even more opportunities for me to learn the ropes and share the stories of doing so. Among other things, we are hosting a wild animals program for some younger children, as well as a program about the Alaska Highway for slightly older children, so I am very much looking forward to shadowing those, and writing about the experience in another two weeks. Until then, please feel free to share any of your experiences working in this field, or doing your first internship after graduation, in the comments, or share this post!

One thought on “Internal Insight: Weeks 5-6.”